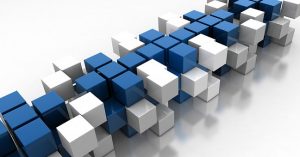 In the first post of this series, I tried to consider approaches that you can use to implement objects with a dynamic structure and promised to justify why almost always Optional in this situation works better than other approaches.

Before we move on to the specific use case, we try to answer the question: what is Optional <T>?

I’ll venture to give my own visual definition: in the first approximation Optional <T> is an analog of the case of a physical object, for example – glasses. Whether the object is inside the case, you can learn with the isPresent () method. If it is there, you can take it with the get () method.

Well, to get to the next level of understanding, read the documentation 🙂

In this post I tried to show the elegance of this mechanism in a small example. The source texts of the example considered in this post are found on GitHub:

In the example, we try using Java 8 Optional to simulate the operation of a stationary boiler, which can be found in the offices of some companies.

His scheme is shown in the picture below: 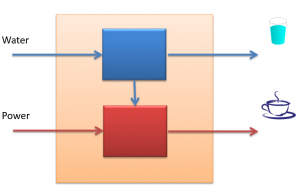 As you can see, the boiler requires water and electricity. At the outlet, the boiler can produce cold or boiled water.

Thus, the input of this device can be described by the following interface:

It is interesting to note here that the device depending on the input data can (or does not) produce cold and boiled water, we present the result of calling get … with Optional <T>.
The behavior of the device as a whole describes an interface that combines input and output methods.

Classes representing types of water for us are of little interest, so we implement them in the least possible way. Here is a class for cold water:

We will assume that a portion of boiled water is a new, different from cold water object. Therefore, we will represent it as an independent class:

So, the task is defined. In the best traditions of TDD (Test-Driven Development), we first write a test to check if we have correctly simulated the behavior of our simple device:

As you can see, our test verifies that the device does indeed issue cold water if water is supplied to the input, regardless of the presence of electricity. But the boiled water is given by the device only if there is water and power supply.
Before proceeding to implementation, stop for a minute and think how would you program this task in the approaches discussed in the previous post:

Look at my, probably not the best solution:

Pay attention to the last significant line of the listing, where the map () method is used from the Optional class. So you can build a chain of processing. If on one of the links in the chain it turns out that further processing is impossible, the entire chain will return an empty response.

Well, that’s all for today.

In the next post we will consider the remaining topics:

One thought on “Java 8 Optional and objects with dynamic structure. Part 2”