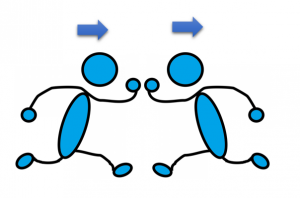 A couple of years ago a friend told me about his new hobby – walking backwards with his back. He brought a lot of arguments in favor of this strange type of movement, but I was not persuaded. Especially since this was not his first strange hobby.

I almost forgot about it, but then several times I met in the parks of people moving in this way.

But it turned out that there are people who not only walk, but also run forward with their backs. And for a long time. And Markus Jurgens recently broke the world record in the marathon race forward with his back, improving it for as long as 4 minutes, conquering the distance in 3 hours 38 minutes. 27 seconds

You can read the details on the Marcus page (if you do not know German, turn on the translator). In the same place you will find a video where it shows how he does it:

It turns out that the marathon distance (42 km.) Marcus runs forward with his back on average a little faster than I run my distance of 10 km.

And I imaged myself a picture. I’m running around a lake. The young man is ahead of me, with his back to the front. Since our speeds are comparable, we will run together for some time, face to face. Those. the situation is like in a compartment of a train. With the person who entered into your compartment and set down opposite you, you simply must exchange a few words.

It would look great from the outside. Two men run alongside. One is normal, the other forward with his back. And they talk about the weather, and maybe about politics …
Russian version of this article you can read here

One thought on “Running forward with your back”